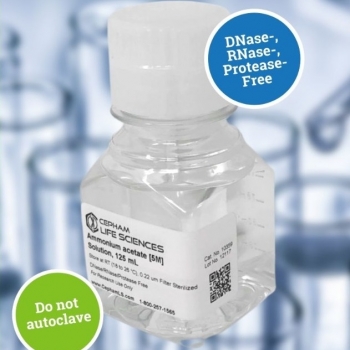 Ammonium acetate is used in molecular biology research, chemical analysis, in pharmaceuticals, and in preserving foods.

Our 5M Ammonium acetate solution is prepared in molecular biology grade/ultrapure water, filter sterilized with 0.22 µm filter and DNase/RNase/Protease Free. Ammonium acetate solution is an important reagent used in molecular biology research- DNA and RNA purification, biological buffers, chemical analysis, in pharmaceuticals, and in preserving foods. It is commonly used for routine precipitation of nucleic acids, and is useful for reducing the co-precipitation of unwanted dNTPs and contaminating oligosaccharides in the sample. Note: 1) Ammonium acetate should not be used when phosphorylating the nucleic acid using T4 polynucleotide kinase, because this enzyme is inhibited by ammonium ions. 2) Do not autoclave Ammonium Acetate Buffer. If precipitates form, warm solution to 37°C to re-suspend. Ammonium acetate is also used in protein studies and protein preparation. It can be used in the protein purification steps of dialysis to remove contaminants through diffusion and, when combined with distilled water, as a protein precipitating agent. It is a popular buffer for mobile phases for HPLC with ESLD detection, for ESI mass spectrometry of proteins and other molecules, and has been used to replace cell buffers with non-volatile salts. Ammonium acetate solution is used commercially as a biodegradable de-icing agent and as an additive in food. Additionally, it is useful in organic chemistry as a catalyst in the Knoevenagel condensation and as a source of ammonia in the Borch reaction.